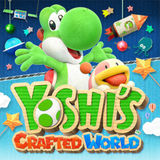 I got this game out of two reasons. The Mario games from Nintendo are usually a safe bet. Even if you don’t like them you can enjoy a well crafted experience. Nintendo rarely let something out half hearted.

The second reason I got this game was that I wanted a game that I could play with my youngest son, 4 years old. He has had some trouble getting into games, because he wants to play the same games as his older brother (8 years old) and they are too hard for him. While I curated the gaming experience for my first born, giving him gradually harder things to play, I haven’t been able to do that with my youngest because he wants to play the same things as his older brother and gets frustrated when he cannot.

So, this is a new game that my eldest hasn’t played, and my younger son really like Yoshi from the Mario games.

First of all, this game has an easy mode that makes the game much easier. That makes it a great introduction to gaming. Second it has some really great aesthetics. It focuses on crafting, as the title gives away, so everything is made of card board, paper, yarn, and so on. The looks are very appealing - so this is a game that is easy to play and looks very good, and familiar to my 4 year old.

I don’t think I need to tell you that he adored this game and he wants to play it all the time. Some parts of it is too hard, and during those parts I helped out. Mostly the bosses, but I think he played 90% of it himself, and for him it felt like an accomplishment to finish his first game even if he didn’t do it all by himself.

What I like about this game is that it is very diverse in terms of game play. It is not a platformer all the way through. Sometimes it turns into a racing game, and at one point it is almost a shoot-em-up. I do get tired of the same card boards over and over, but the game is not very long. The enemies are also mostly the same all through the game which is a bit disappointing, but the bosses are fun and innovative.

I don’t like the gatekeeping that they’re doing of the different worlds. So, there are like 30 levels all divided into 10 worlds. In every level you collect flowers and in order to go to the next world, you need to have collected a certain amount of flowers. The purpose is that you shouldn’t just rush through the levels, but take time to explore them all. I think they should have scrapped that in the easy mode, because my 4 year old doesn’t want to play the same level over and over to collect flowers. He wants to progress, and that means I need to go back and replay his levels in order to collect flowers for him to progress.

I think it is unnecessary and they could have designed the levels in a way that you wouldn’t have to gate keep parts of the game. New Super Mario Bros Deluxe, didn’t need such system, and I don’t think that this game needs it either.

I’m happy with the game. The story didn’t blow my socks off, but it was a really joyful experience to have together with my son that his now much better equipped to take on other platform games.