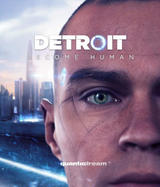 Detroit: Become Human is a story driven narrative game where you play three different Androids on separate paths to find consciousness, waking up and becoming living being. This is a story about racism, about breaking free of your bonds and choosing how you want to fight the oppression of your masters. Needless to say, this is a pretty powerful story.

This game was a roller coaster from start to finish of emotions, action and surprises. I never really knew where the story was taking me and it actually shocked me, not once but at several occasions. It made me flinch, and after just playing Doom (2016) I would say, making me flinch is a great accomplishment.

The story that is told is really really good. I was afraid that it would end prematurely but instead I wound it building tension in just the right pace, and ending precisely where it needed to. It is unpredictable within the chapters, but quite predictable as an arc, and here I might have wished for some larger turn of events.

The direction and the voice casting all stand out as excellent but the script is phenomenal. It is so good, I don’t think I’ve seen anything like it in a video game. And that is despite the many paths the story could take. It is that extra sigh within a conversation that communicates so much about the characters predicament. I think that is the real star of this game. The script writers should get some kind of medal.

What are the bad parts then? The controls and the camera are awful. It is supposed to be played from fixed camera angles but it works very badly. I hate the way the game is controlled, but the game never really make you depend on great controls. It doesn’t ask you to do advanced platforming or aiming. It kind of knows about its control limitations and work around it.

This is a game where all of your choices have permanent consequences, and it means that you can kill the wrong character and lock yourself out of parts of the story. A companion that dies early in the game might mean they are not there to protect you several chapters later.

During the action sequences the game relies heavily on quick time events. I’m fine with QTE’s for the most part but having a long fight scene like 30 minutes of only QTE’s is over the top for me. I wished they would have solved that in a better way.

The dialogue options are sometimes a bit disconnected and non intuitive. You select an option that means one thing and then your character blurts out something you didn’t want to say at all. For instance, a guard tells you to stop right there. You select the response “determined” and your character tells the guard to fuck off. No no no, that is not at all what I wanted. None of those options ever got me killed, but I’m certain it made me fail some of the interrogations.

I loved the characters, I loved the story. I loved doing the investigations of crime scenes and following up on clues. I loved trying to figure out Hank and getting him to like me (he never did). I love how this game looks, both the pretty sunset sky and the run down suburbia of Detroit. This was a very strong experience for me and I hope they come up with a sequel.