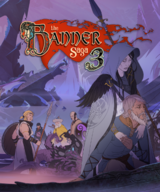 The Banner Saga 3 is not just the second sequel to The Banner Saga, but the third and last part in a 3 chapter story. The game is centered around two groups of people, one that is holding up in Alberang trying to survive as the darkness creeps nearer, and the other group with two Valka going into the darkness with the purpose of undoing it.

The game play is the same as the previous games. You will get lots of dialogue options to choose from which will have a direct effect on how your heroes are doing. Then the game will quickly switch to a turn based tactical view for combat. There are a few new enemy types in this game, and a new system where you can fight the reinforcements after killing the last enemy. If you do it, you'll get a reward, or you can just bail early, no hard feelings.

My main trifle with this game is that it is mostly about numbers. I spend a lot of time in menus leveling up characters, assigning skill points, hero’s titles, convert renown to supplies. There are so many numbers and I don’t think I clearly understand them all, but some of them make a huge impact during a fight. It makes me feel more like an accountant than anything else.

The tactical fighting is okay. Again it is hard to understand all the systems that are in place, and it is very hard playing on normal so I played on easy. The fighting do get very repetitive in the long run as they do not evolve. You will fight the same 5 enemy types over and over for 5 hours and it quickly becomes boring. If you’re into turn based tactical fighting then Into the Breach is a much better game.

The first chapter of The Banner Saga was very interesting. It was something new, and it brought characters and a world with depth. The second chapter was really boring. All we did was traveling from one part of the land to the next. It didn’t bring anything new to the table. This time around the story has been dialed up to 11. Everything is at stake and balancing at the tip of a needle. You can feel the tension and when that hero you were really attach to dies, ... it made me upset.

The reason that I kept playing despite the boring combat is the story. It is really good and it is really engaging in this last chapter. I also got a pretty good ending I think, but I can see how you easily can mess it up by making the wrong choice somewhere along the way.

Was it worth playing through all the parts? Yes! I think The Banner Saga was really good. I would compare it with The Wheel of Time. Sometimes they are just going somewhere and not much is happening and then you get some really dramatic scenes that will tear your heart out. I wouldn’t play all the three parts after each other, but as an episodic game that you play once a year, I think the bite size is perfect.

Review The Banner Saga 3 on R3PL4Y