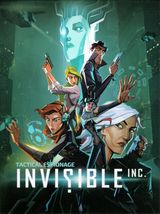 I misunderstood this game. I thought it was something else, a big studio making a cool turn based game, but this is as much indie as it gets. Once you get that, you also understand the limitations that the developer is struggling with, but now we’re getting ahead of ourselves.

Invisible Inc is a tactical turn based sneaking game. Think of it as X-COM but instead of shooting you sneak around like in Hitman. So a cross over between X-COM and Hitman. The levels are randomly generated but they follow a line of progression from the start to the end.

Each level you beam in, and you have an objective. There are a couple of different objectives - steal their money, technology, weapons or find a detainee and free them. You move in turns where you and the computer take turns. Every 6 turn or so the security level increases, and each time it increase the game gets harder. More guards turn up. Security cameras that were off turns on, and such. So you are always pressed on time, but it is not a stressful game as it is turn based.

I think this game does very well. It feels balanced and fair. I never get angry with the game like I get with XCOM. When I fail it is only my own fault because I wasn’t careful enough or thought enough ahead. The game is very hard, but I played it on Beginner and then it was quite manageable. I had to restart two missions but that is fine.

The story of the game is not much to hang in the Christmas tree. It is quite boring. The characters are also quite meek and I do not get invested in them. I think the story is there mainly as an excuse for beaming into these corporations and steal their shit. When the game ended I was surprised, because it didn’t feel like a conclusion to the main plot line. It felt more like a chapter ended than the whole game.

But I understand why they couldn’t have made the game longer. It is very repetitive. You beam into the same location over and over. Well, it is a new random generated map but it looks just the same as the previous. There are no variety at all. This is also the game’s biggest weakness. Where XCOM manage to provide a new environment almost every time, this game manage to provide the same environment every time. It gets boring and that is why it must be this short.