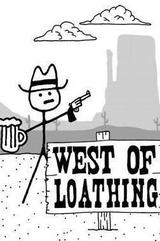 I didn’t quite know what to expect from this one. We’ve all seen the stick figures aesthetic. How can this be any good? Well it can, video games are not that dependent on advanced graphics. Only AAA studios seem to think that.

West of Loathing has a lot in common with Undertale. They are both RPG games that make fun of the RPG genre by being sarcastically RPGish. It starts off like the model for RPGs where you start out as a nobody seeking your fortune and end up as the hero.

The writing of this game is very good and it has me laughing out loud several times. Especially the internal monologues of digging through a spittoon is so funny. The way the writers handle your expectations are just masterful. It has me thinking a lot about the Secret of Monkey Island.

However, where Monkey Island has an overall story arc and great world building, West of Loathing has lots of small moments that doesn’t really make sense in the overall arc. You keep doing a lot of tasks for people and you never really know why. Maybe that’s also a comment on RPGs.

This game leans heavily on its writing and it leans heavily on you as the player reading a lot of text. I don’t mind, but on the TV it strains my eyes after a while. It works better on the Switch undocked but also there I get tired in my eyes as that screen is not made for reading. I would say that the writing picks up where other aspects like graphics or sound lack, and that is why you need to read so much.

The fighting is not very good. It took quite a long while, until the end of the game, before I understood why I made huge damage in certain fights and almost none in others. The game doesn’t teach you the mechanics but it is essential for you to learn them if you’re going to finish the game.

The game is too long. It doesn’t keep interesting for that many hours. You do the same random encounters over and over in hopes of getting leveled up so you can continue to the end. The puzzles are good, just the right amount of difficulty but also they seem to repeat with time. I never really understood the futuristic robot part of it all.

All in all a good game if you’re after some laughs.

Review West of Loathing on R3PL4Y