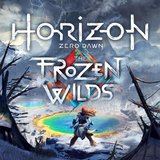 It was time to return to Horizon and play the DLC that has been so critically acclaimed. I finished the main campaign in 2018 and even if I loved it, I felt I needed a break before I started the DLC. That was a good decision. It felt really good being back with Alloy and her adventures in the wilderness.

I was afraid that I wouldn’t know how to play anymore because Horizon is a pretty technical game, but it came back to me quite quickly and the game is helpful in telling you what buttons you need to press.

The DLC takes place in the north, as the name suggests, with the Banuk people. You are the outlander (as always) helping the ingenious people sorting out their affairs. There are strange new machines walking around and in the midst of the snow covered landscape a huge volcano that spew fire and ash. It makes for quite a sight.

As before the game looks gorgeous, is very fun to play and Alloy might be one of my favorite characters of any game. I just love her facial expressions and tone of voice that has so much depth.

The environment is really cool (pun intended) even if its just snow and mountains it's very well crafted and you quickly figure out the landscape. The new machines are fun to fight and I still get elevated pulse from the intense fights.

Ok, so what’s not to like? Well, why is Alloy there to begin with? The game doesn’t really know. “I’m interested in your machines” she says but that is not really a reason to venture into this climate. The premise of the story is not there. Then you meet the Banuk and the story takes you, not unsurprisingly into the volcano to stop this infestation of new machines. But I keep asking myself why? The story is just so bad in this DLC, it’s like Guerrilla Games were contracted a new DLC from Sony but they didn’t have any more to say.

Another thing that really bothers me is that the area is supposed to be Yellowstone, explaining the volcano. But Yellowstone is not a volcano but a caldera. And that means that the ice shouldn’t be there to begin with because the area should be warm enough to melt it. At least as it seems summer enough a few minutes trek to the south.

The conclusion of the DLC is very disappointing and I would expect the climate to stabilize and spring come to the valley, but none of that. It was just a segway into a potential sequel and I hate those kind of endings.

If you want more Horizon, go ahead and play it, but don’t expect any big revelations in this adventure.