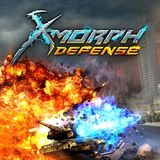 Back in the day Command & Conquer was a real eye-opener to me. It introduced me to a whole new genre, the RTS. I had never played anything like it before and the FMV was like gaming just taken a generational leap.

There were several C&C games, I remember Red Alert, Red Alert 2 and my favourite Tiberian Sun. After that something happened and the genre lost its glamor for me. I wanted to like Command & Conquer 4, StarCraft 2, Warcraft 3 but I couldn’t. Maybe it was that it started to get focused on “matches” and “skirmishes”. Everything had to happen so fast, and they were over so quick.

X-Morph is a tower defense game and it reminds me a lot of those old real time strategy games of the 90’s. This game focus on building a base, a place to defend and protecting that base. It is a simple concept but very intriguing. What I love about this game is that it is semi real time. Each mission has several phases and between each phase you get the opportunity to take your time and plan for the next attack. The game is even kind enough to tell you exactly what enemies it will through against you in the next wave and what path they will take through your defenses. That way you can plan how you want the enemy to traverse the level.

Once the battle is going you can chose between helping out fighting the oncoming forces or you can focus on gathering materials and build new defense towers as the battle progress. The first one might be necessary to live through the phase, but the second one will make you even stronger for the next turn.

The environment is destructible so you can block the path of incoming armies by blowing up a building or a bridge. But sometimes it makes sense to not blow something up because that will create a longer route for the armies to your base. The attack patterns of the enemy changes with every turn and even if you’ll see very much the same enemies on different maps, the game will combine it into new interesting patterns.

The good parts is that the game is very enjoyable to play. It is very rewarding when you get your strategy right and it is also very forgiving in the easier difficulty. You can play couch coop with a friend and that is lots of fun even if you need to get along where to place those defense towers.

The bad parts, I hate the aesthetics of the aliens. They look and sound so tasteless. Just the idea that the machine alien is a humanoid is a testament to how bad it is. Also the whole macho jargon of the human commanders is so tiresome. The story is such a waste and I get irritated by the bad writing. It would be better to just leave it out. When there is too much shooting going on the frame rate drops quite badly. That is strange because the graphics aren’t particularly advanced.

Even though, I played through the whole campaign I couldn’t stop myself and played the three DLC Europe missions as well. That is very unusual for me to want more after I’m done with a game. Another point is the rarity of playing as the evil bad guy. That is also very refreshing.

If you like tower defense or RTS, you're in for a treat.