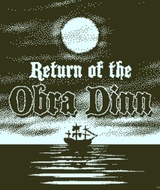 Return of the Obra Dinn
mikaellundin 24 December, 12:23 Completed the game

I’m really into walking simulators and this is a walking simulator and a puzzle game in one. The story is really good and it unfolds in a Memento fashion where you see the ending first and you work yourself backward from there. There are a lot of nice details and subplots, and once and a while you go “whaaat!?” and “really!?”. A complete amusing story from end to start with good pacing.

The way it is told is from memories of the passengers and crew. You use a “memento mori” to look into someones death, how they died, and then you try deduct the story from there. This is a very powerful story telling trick as you have a death in every scene keeping it interesting.

The graphics are unique. It is not only black and white but completely monochrome. It does a good job of reminding you that this is 1807. It also does a good job of downplaying all the blood and gore. It is not that disgusting in a monochrome setting. With that said the game manages to look gorgeous, without using any colors at all, something I haven’t seen since Limbo.

The puzzles are quite hard, sometimes too hard. I had to look up the identities of some of the sailors because I couldn’t figure it out. I also had some trouble deciding if a passenger was knifed or clawed, speared or spiked, crushed or torn apart. Sometimes the game helps you by making several options correct.

But what I like about the puzzles is that you are given lots of clues for every individual who that person is, by the way they are dressed, their accent when they talk, what other crew they're hanging out with and such.

What I didn't like was the ending that I thought was abrubt and unsatisfying, but that might be that I didn't get the good ending because I missed identifying 4 crew mates.

This is a masterpiece anyway.

Review Return of the Obra Dinn on R3PL4Y