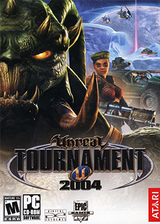 There was those who where playing Quake, and then there was me. Sure, I would play Quake Arena when we teamed up for LAN events, but I didn't enjoy it much. I found it to be a competition of who was the best sharp shooter. I like Unreal Tournament much better, because you had a wide variety of weapons and no railgun.

It was a bit slower than Quake Arena, which made it much more tactical. It was not about quick reflexes, it was using the right weapon, the right way.

So I challanged the Quake Arena king of the school. I said, I could beat him in Unreal Tournament. It was a profound statement as it has been proven that I was lousy at Quake. He thought he was walking into an easy game.

He lost, 10-1, because he couldn't grasp the concept of using the flack cannon to bounce projectiles on the walls. I would simply kill him before he even saw me. He called me a cheater and said that he would win 10 times over in Quake Arena. That he would, but he could never understand the game rules of Unreal Tournament.

So I found this third installment of Unreal Tournament when I was cleaning out my wardrobe. It comes in 7 CDs and I remember what hurdle it was to install. It took literally hours.

I'm not sure if it was worth it. I remember this game as being simply more of the good parts and some strange new parts as vehicles. I didn't like it as much as the original game, and you couldn't find another soul to play it with, unless with strangers online that where using target mods killing the fun out of the game.

I don't think I returned to a pure death match game after this. It was the death of true death match FPS. Today they're called Call of Duty and Battlefield. I need to get back into the game some day, but not before I find some pro to humiliate with my flak cannon talents.