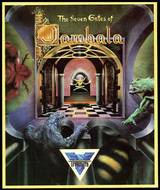 I'm not sure about the background story on this platformer, but you're this little man, in a wizards hat. You go knock on doors in this world where there are evil creatures that will help you or deceive you, but absolutely positive take your money.

Some of these creatures will sell you powers like, jump extra high or shoot purple oysters. So you need money.

You get money by trowing magic powder on a giant bee, that will instantly drop a hammer. With this hammer you can mine mushrooms and flowers around the world, that will spew up coins.

I wonder what the developers TCB were taking, because I want some too. This is so weird, but cute and a bit fun. The game is quite hard because the controls aren't very responsive.

This really reminds me of the movie "Planet 9 from outer space" that is really crappy, but fun because it is so bad.